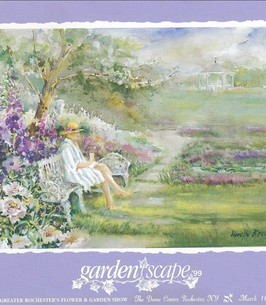 Born in 1931 and raised in Baldwinsville, NY, Loretta wanted to attend college. She took a job at GE in Syracuse as a secretary to earn her tuition and expenses for the first year, a requirement of her father. She also occasionally worked modeling and attended modeling school for a short stint. She graduated from Green Mountain Junior College for Girls in Vermont, which she chose so that she could ski, a lifelong passion. There, she earned a “Green Key,” which was given out for achieving a high GPA.

At GE Loretta met Burt Brown; tall and handsome, he loved to dance and sail. He courted her for five years before they were married and moved to Hartford, CT where Burt worked for the Hartford Insurance Company and Loretta worked as a secretary to the engineers at Pratt & Whitney. It was important that she could keep a secret because they did do some work for the military. She made 65 cents an hour!
Then Burt got transferred to Rochester and they moved to Penfield. They moved back to Burt’s hometown of Scottsville when his work wanted to transfer him again. They didn’t want that, so Burt bought the Frank W. Matthews Insurance Agency and they moved back to Scottsville.

Loretta agreed to learn to sail if Burt learned to ski. Loretta was crew for Burt on his Flying Dutchman where she learned to fly out over the water on the trapeze to stabilize the boat. She inspired in him a passion for skiing and they both became members of the ski patrol for many years. Over the course of their 55-year marriage they built a house together and sensitively restored two 19 century houses. They took their children camping every summer and loved to ballroom dance.

Loretta raised two independent-minded, creative and hardworking children who shared their parents’ many interests in skiing, sailing, nature, art, and building. Loretta was a vibrant social presence in town, a life-long member of the Scottsville Presbyterian Church, and a savvy stock investor. But perhaps her greatest passion was painting. She exhibited her watercolors yearly at the Memorial Art Gallery Clothesline show. She also exhibited at the Corn Hill festival, the Park Avenue festival, and festivals along the canal in Pittsford, and in Buffalo. She was a member of the Rochester Art Club and was chosen to make a poster for the Gardenscapes show at the Dome Arena in 2001, and her painting was chosen for the Lilac Festival’s poster in 2002. Almost every summer she spent time by the seashore painting in Rockport, Massachusetts.

Loretta delighted in following the accomplishments and keeping in touch with her four granddaughters, who are scattered from New York to Hawaii.
Loretta and Burt spent the last chapter of their lives in their old farmhouse, surrounded by their large vegetable garden, beautiful barns, fields, and golden retrievers. Loretta lived the last ten years there by herself although she had lost much of her sight and some of her hearing, a testimony to her independence and iron will.
Her memorial service will be held Sunday, May 1st at 1:00 at the Union Presbyterian Church, 1 Browns Ave, Scottsville.

All rights reserved. This obituary is also archived at obittree.com